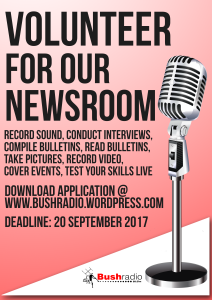 On 5 September 2017 Anton Harber*, Adjunct Professor of Journalism at the University of the Witwatersrand, paid a visit to Bush Radio.

As part of his visit we asked him to speak with the interns as part of our staff development sessions.

He shared his thoughts on a range of issues ranging from what makes a good story to fake news.

Anyone interested in journalism and the media should take a listen.

This is an audio recording of that discussion.

*Anton Harber is Adjunct Professor of Journalism. His research interests include journalism; media; and history of South African media. Harber is the Founding Editor of the Mail & Guardian newspaper (previously known as the Weekly Mail). Previously, he also worked as Sub-Editor for the Sunday Post and Sowetan newspapers and as Political Reporter for the Rand Daily Mail. Between 1997 and 2001, Harber was the CEO of Kagiso Broadcasting and between 1998 and 2001, he was the Executive Director of Kagiso Media Ltd. Harber has held a number of other positions such as Chair of the South African Conference of Editors (in 1991), Chair of the National Association of Broadcasters (in 1998) and Chair of the Freedom of Expression Institute (in 2010).  – source: University of the Witwatersrand