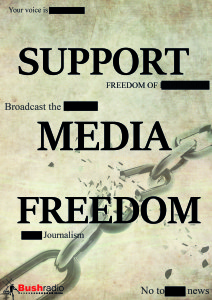 19 October marks the 40th anniversary in South Africa of the infamous “Black Wednesday”.

On this day in 1977 in South Africa, then-minister of justice Jimmy Kruger banned The World and Weekend World. He justified the banning by stating that these publications were “publishing inflammatory material that threatened the nation’s security” and the paper’s editor Percy Qoboza and other journalists were arrested and jailed.

19 organisations were also banned and apartheid critics were detained.

We have released the video and poster above in support of media freedom. Share and show your support.

2 thoughts on “This is the sound of NO media freedom”